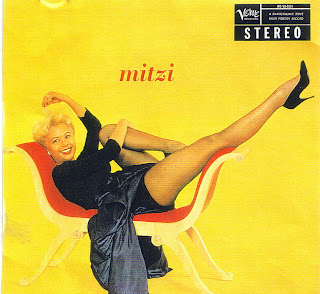 Mitzi Gaynor's first album was a fun attempt. This was done after the success of South Pacific. Granted Mitzi wasn't a great singer but she knew how to work to the best of her abilities. She works best on the up tempo songs like "I won't dance" and "Do it again." It mostly succeeds because of Pete King's playful arrangements. Her second album, "Mitzi Gaynor sings the lyrics of Ira Gershwin" isn't as good. Her voice was more polished and she took the music more seriously. Even though it had mixed reviews I would like to her "The I don't care girl". The clip featured from the A and E biography on her looked fun.
Posted by bethrecordcollector at 9:44 PM No comments: