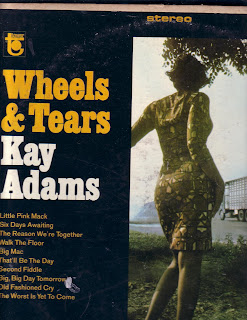 From my rate your music review

Kay Adams was the best at the gimmick she did in the late 60's. She sang songs about truck driving, the best of which here was the Little Pink Mack. It's a shame that she was only part of a gimmick because she had talent. She's very energetic and her voice reminds me of Reba. This album is pretty fun. It has some answer songs to other truck driving songs at the time, one of which is Six Days A-Waiting, which was repeated on her other album Make Mine Country. Sundazed put this album on cd but it sadly didn't last long.
Posted by bethrecordcollector at 10:32 PM No comments:

Jean Ritchie Riddle me This 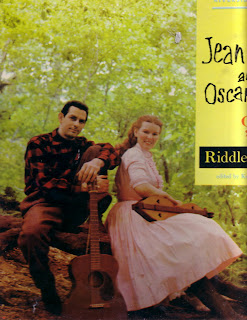 An interesting album not on cd. This is Jean Ritchie and Oscar Brand, best known for his drinking songs dueting. I believe this wasn't their only work together. It's pleasant and has a nice folky feel.
Posted by bethrecordcollector at 2:55 PM No comments: 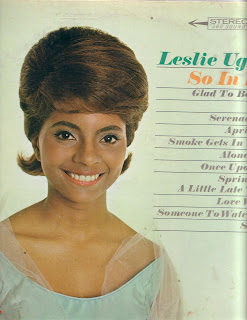 Leslie Uggams made her start with Mitch Miller. In her first two albums Leslie Uggams on TV and More Leslie Uggams on TV, the chorus was dominant. In here Leslie is accompanied by strings. It's a lovely albums of standards. It's amazing that she was twenty and could understand the lyrics so well. This should be on cd.
Posted by bethrecordcollector at 10:22 PM 1 comment: 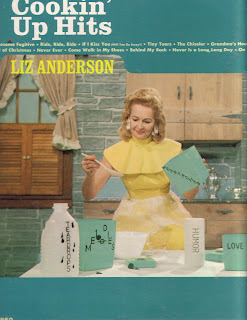 Liz Anderson is most known for being Lynn Anderson's mom but she was also an exceptional songwriter, writing early hits for Merle Haggard such as My Friends Are Gonna Be Strangers. She had a sweet voice. I own a number of records by her but this is my favorite. There are a number of good songs here like The Chiseler and Come walk in my Shoes. It's interesting to hear her sing I'm a Lonesome Fugitive compared to the dark Merle Haggard version. I also love the cover. Her daughter later covered Ride, Ride, Ride and If I Kiss You just as well.
Posted by bethrecordcollector at 12:17 PM No comments:

Lisa Kindred's voice kind of reminds me of Judy Henske with the theatre presence. It's deep and bluesy. This folk album was made in the mid 60's and just has traditional material which was coming out of the style. Erik Darling and her share three duets here. The best songs though are the ones she sings alone like I like it this way and If you live your time will come. If you are looking for more obscure folk efforts from the 60's than Joan Baez this fits the bill.
Posted by bethrecordcollector at 2:27 PM No comments: