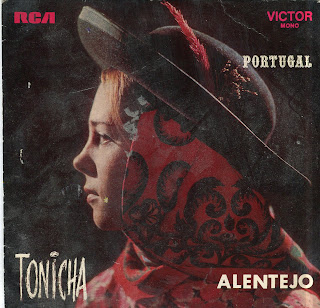 This is a 45 I found at a thrift store. It's from Portugal and it's folk. It's pretty neat. Unfortunately the cd on her from Amazon that covers Tonicha's 70's work is out of print. Any info would be appreciated.
Posted by bethrecordcollector at 10:29 PM No comments: 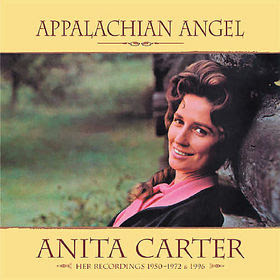 From my amazon review. Like the booklet says "Anita Carter never got the fame she deserved." This isn't just talk. This is the definite truth. My guess for why she didn't achieve the fame is because she wasn't urban enough for the folk scene. Anita not only matched her contemporaries, I'm sure she would have send most of them running.
Bear Family has done a service putting these recordings together. The box comes with a hard bound book, full of pictures, a few of which come from her Carter Family days. One thing comes through she was one beauty and as the booklet describes a modest person.
There are seven discs here. The first and second deal with her early years and include her Hank Snow duets. Her voice is maturing here but it's pretty cute. I especially enjoy the numbers Don Juan and Blue Doll. The other discs show off the country and folk side she would truly excel at. Generally the best of these show up on the Ring of Fire compilation. Anita's 70's recordings sound a bit different than these but they are still brilliant. Her Waylon Jennings duets are here as well as her last 1996 recordings.
The seventh disc is of her 'Nita Rita and Ruby period. Apparently these were done by Ruby Wright (Kitty Wells' daughter), Rita Robbins, and Anita just for fun. But it comes through pretty well, something reminiscent of the 50's Chordettes sound

I'm Jessi Colter/Jessi/Diamond in the rough 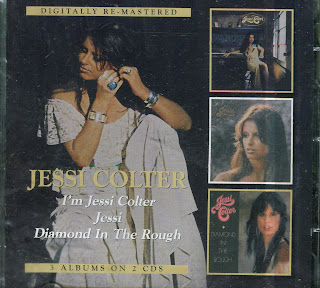 I'm so glad that BGO Records released these 3 albums on two cds. My records were scratchy. Jessi Colter was one of the best country singers of the 70's. She was an unique songwriter. Her "I'm not Lisa" was a hit where she tells her man to stop thinking of his past flame. Her "I'm Jessi Colter" is my favorite record here. It's a straight through listen. There's many good songs like Is there any way you'd say forever, What's happened to blue eyes, Storms never last. Her voice is cool. It kind of has an edge to it. I hope that someone releases more of her albums. Tanya Tucker did a neat version of "I'm not Lisa" too on her Tanya Tucker album.